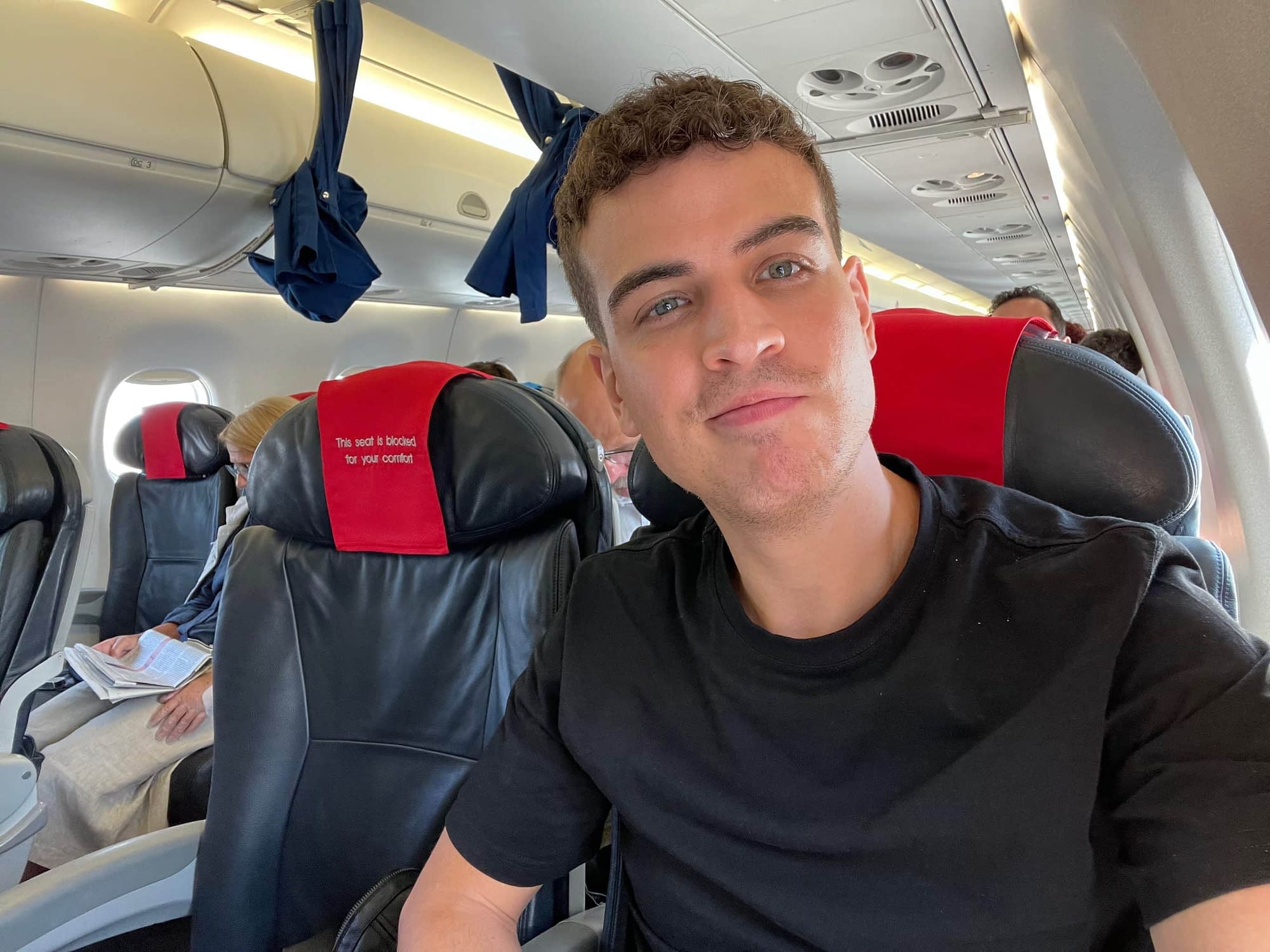 This is the first leg of my trip from Madrid to Stockholm. Part 2 of this report coming up.

Each time I get to try a new airline, airplane, or product I get really excited and this time was no different. It was my first time flying LOT Polish Airlines

My flight was at 15:30, but I woke up early to prepare the final pieces of luggage and get some breakfast before checking out Aloft Hotel Madrid. I checked-in online:

I called a Bolt, which in my experience has been better than Cabify lately, and after a short 20-minute ride, I was already at Barajas Terminal 2.

At the airport (Madrid Barajas T2)

The check-in had already started and there was some line for the economy, but not too bad (about 40 people. There was no line for business class so it took no time. My luggage was checked through to Arlanda and I saw the agent adding two stickers, one for priority and the other for short connection (50 minutes). Our flight was leaving from gate D60 and we had access to the Alcalá lounge (managed by Anna)

I got the boarding passes printed and went straight to security. Barajas has separate Fast Track / VIP security lanes in all terminals, and they are usually quite smooth. I got to use those in Terminals 1 and 4, but never on Terminal 3 until this flight.

We waited in line for a few minutes, as one of the machines was broken, and then went down the stairs and through the security checkpoint. The whole process took less than a minute.

After you pass through security, you are right next to gates D60/61, which is where the Alcalá VIP Lounge is located (first floor, up the stairs). At the entrance of the lounge, there was a host asking for our boating passes and giving us some flight and lounge information.

My airplane was an 11-year-old Embraer 195LR (long-range), SP-LNC. I could spot it from the lounge right after it landed, and it had a special livery.

After a 1h-stay there I went to the gate 5 minutes before boarding time. People were already queued, but the lines were messy, so some staff came to re-organize the lines and signs. All business class and priority passengers were moved to the other side of the gate. Luckily no other flight was boarding right beside us, so there was plenty of space.

Boarding began on time and went quite smoothly. Ground agents only asked for boarding passes only, no IDs, speeding things up. As soon as stepping on the airplane we were greeted by the crew.

One interesting thing about their Business Class on LOT’s Embraers is that they block two seats for each passenger, for “extra comfort”. So, if you are traveling solo, you have the whole row for yourself. And if you are traveling with someone, you have to book either on each side of the plane or one behind the other. I took some screenshots when doing the check-in to clarify what I mean:

I guess they do this so that each passenger has direct access to the aisle. This layout makes the business-class cabin feel very empty and intimate. It also gives a lot of room on the overhead bins, which by the way are much larger than in any other Embraer I flew before (KLM’s, Aerolineas Argentinas, Lufthansa, etc.)

Boarding was completed after 20 minutes, but we had to queue at the gate for around 15 more minutes before we were able to depart. The captain told us we lost our departing slot and now we had to be rescheduled. Soon, we pushed back and started going toward the runway. For some reason, we were assigned the furthermost runway, close to Terminal 4.

The takeoff was beautiful and a bit windy. Check the full video on my YouTube channel!

The service was full of nice little details, such as a menu card, napkins with the logo, nice cutlery, etc. Overall, quite impressive for such a short flight. Lufthansa, for example, on similar-length legs, has a significantly worse service.

After lunch, I worked for a little bit, and then enjoyed the beautiful views 🙂

Close to Warsaw, it started to get cloudy and grey, so the landing was quite bumpy. After the landing, we went straight to the terminal, gate A40.

Overall, I would say LOT airlines offer a very competitive business class offer. Even though planes are smaller than other airlines (using A320s and 737s), blocking the seat on the side gives a lot of extra room and comfort. The soft product was excellent, the meal quality was great, and the crew was outstanding; super friendly and warm. Warsaw airport (WAW) was also nice for connecting and offered several business class lounge options.

AirLapse on Swebbtv! My footage from the first Scandinavian Airlines SAS A350-900 landing in Chicago was featured in an episode of the Swedish Web Television! Although the mention to SAS within the episode is to complain about their latest Ad campaign “What is truly Scandinavian?”, which frustrated a lot of Scandinavians, it was still a highlight for me that they decided to ask and include my footage. The ad from SAS already has 99k dislikes and they had to turn off comments!

I woke up really excited, because my ‘Valentine’s’ date was a flight with an Airbus A220-300 that I’ve never flown before, from Zurich to Hamburg with Swiss Airlines. However, minutes before boarding the aircraft was changed to an old A320-200 due to overbooking. Check out the full video review and visit to the Swiss Alpine Lounge in Zurich!

Throwback to a 2016 video of a landing in Buenos Aires, Ministro Pistarini Ezeiza Airport. I was travelling in Business Class from Rome to Buenos Aires (the meal service was great BTW). Will try to post a review soon, although Alitalia seems to be going out of service soon if they don’t revert their financial situation. What a pity to see another airline struggling!

It’s only in a few days, on February 9, that SAS will launch its new route between Copenhagen and John F. Kennedy International Airport in New York (SAS JFK to Copenhagen). This will be a regular service that will be restarted for the first time in 30 years. Even though they already had a route to Neward, the connection to JFK will save a ton of time for people from the East side of the city.

I want to help you fly, go on adventures, and travel around the world for (almost) FREE